Enter for a chance to Win a Free Vacation!

*Promotion is subject to availability, may not be combinable with certain fares or other amenity offers, is capacity controlled and may be withdrawn at any time. Other restrictions apply.

READY TO PLAN YOUR SHORE EXCURSIONS?

Auckland is regularly voted one of the best lifestyle cities in the world, with the cosmopolitan city centre complemented by great escapes within half an hour of downtown. Indulge in Auckland's shopping, nightlife and unrivalled cuisine and experience some of the many attractions and adventure activities on offer. There is never a shortage of things to do in the City of Sails. Sights to see include Auckland Art Gallery, Auckland Zoo, and Museum of Transport and Technology.

Rich in legend and history, the Bay of Islands is New Zealand's cradle of European civilization, with many points of interest relating to early European and Maori settlement. There are many "firsts" associated with the Bay of Islands, such as the first European community, the oldest home and church in the country and the first capital of New Zealand, among others. Reserves have been established to protect what is left of the once vast native kauri forests with magnificent trees rivaling California's redwoods. Major sites in the Islands include historical Waitangi, Paihia, a subtropical marine resort popular as a starting point for bay cruises and fishing excursions, and Russell, one of the oldest towns in New Zealand known as the “Hell Hole of the Pacific”. Anglers still regard the Bay of Islands as a top fishing area, while residents cherish its unhurried pace, balmy climate and serenity. Other sights include Motukako Island, Kawhiti Caves, Maori Meeting House, and the Bay of Islands Maritime and Historic Park.

Lautoka is sited in the western side of Viti Levu, the largest island in Fiji, and approximately 250 km from Suva, the capital. The city is surrounded with the blue Pacific Ocean on the western side and green gold sugar cane together with pine trees on the other sides. This side of the island is more diverse. One of the prime shopping areas nearby is the town of Nadi.

Suva is the pulsing heart of the South Pacific and Fiji's main port. This waterfront district provides the hub for much of Suva’s activiy with high-rise office buildings, colonial buildings with second-story verandas, parks and government buildings. Many main points of interest are located on Victoria Parade and its extension, tree-shaded Queen Elizabeth Drive. Visit Thurston Gardens, Suva’s botanical park lush. The Fiji Museum reflects 3,000 years of Fijian history. Government House is on a hillside surrounded by landscaped grounds. The monthly Changing of the Guard is executed with almost as much pomp and ceremony as at London’s Buckingham Palace. Tholo-I-Suva Forest Park offers miles of trails through beautiful mahogany forest. There are waterfalls, natural swimming pools and thatched pavilions with tables. At picturesque Suva Cemetery you will find Fijian graves wrapped in colorful sulus and tapa cloth. The Pacific Harbor Resort on Coral Coast boasts an 18-hole championship course. Watersports include fishing, diving, and snorkeling.

Cradled along Upolu's northern shore lies the peaceful township of Apia. Picturesque thatched-roof "fales" blend into the emerald-hued countryside. Jagged mountains rise above deserted beaches where trade winds sigh on coconut palms. Banana groves and bread-fruit trees gently ripen in the moist, tropical climate. Western Samoa's friendly, carefree islanders will welcome you and proudly show you the former home of their adopted son, Robert Louis Stevenson. This is a contented island where traditional ways hold despite the passage of time.

Travel across the International Dateline and step forward or backward in time one day.

Pago Pago, the town and capital of American Samoa, is on the Southern shore of Tutuila island. Pago Pago has an excellent, landlocked harbor.

Travel across the International Dateline and step forward or backward in time one day.

Nuku'alofa, the capital and largest town of Tonga is on the north coast of Tongatapu Island in the southern Pacific Ocean. It is the island's chief port and principal economic, administrative, and tourist centre. The red-roofed Royal Palace (1865-1867) on the waterfront, is a major landmark. In 1643 the Dutch navigator Abel Janszoon Tasman landed here.

Auckland is regularly voted one of the best lifestyle cities in the world, with the cosmopolitan city centre complemented by great escapes within half an hour of downtown. Indulge in Auckland's shopping, nightlife and unrivalled cuisine and experience some of the many attractions and adventure activities on offer. There is never a shortage of things to do in the City of Sails. Sights to see include Auckland Art Gallery, Auckland Zoo, and Museum of Transport and Technology. 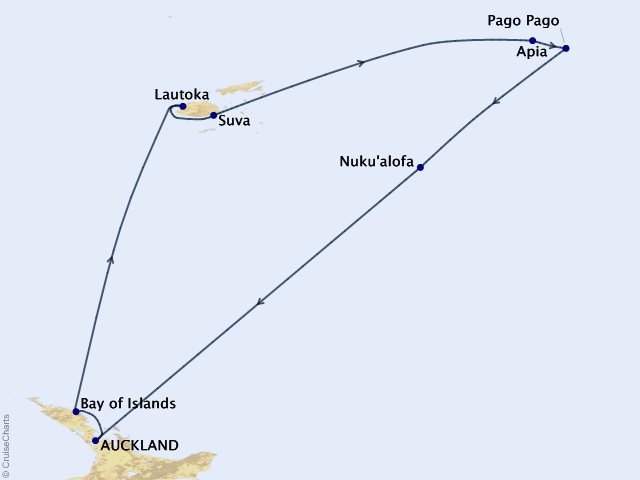 Itinerary subject to change without notice. Please confirm itinerary at time of booking.

Rates are cruise only, per person, based on double occupancy. Taxes, Fees and Port Expenses of $145.78 additional for all guests. Rates are subject to availability and may change without notice. Restrictions may apply.

Remarks:
Prices are per person, based on double occupancy. Airfare, Taxes, Fees and Port Expenses are additional for all guests. Pricing for 3rd and 4th guests are available upon request and are subject to stateroom category availability. Prices change frequently

All prices per person and in USD unless otherwise stated.
Offer ID:
1370065

Reference this number when contacting our agency so we may better serve you. Also keeping this number handy will allow you to locate this document again quickly.

Information and pricing is subject to change without notice. While we do our very best to ensure that information and pricing appearing in this website is complete and accurate, we cannot be responsible for incomplete and inaccurate representations, which may or may not be under our control. In the event of a pricing error, misrepresentation or omission, we reserve the right to adjust the pricing or make any other corrections.

Enter for a chance to Win a Free Vacation!